Arthur Fuller was born in Exeter, New Hampshire, and educated at Harvard College and the Chicago Academy of Fine Arts.

Fuller was a passionate sportsman all his life. His hunting and fishing pictures were a natural extension of his identity. The accuracy of detail in his covers and story illustrations for Field and Stream won him a large following among readers throughout his career.

Earlier in his career, Fuller had illustrated more general subject matter for many major magazines, including Greenbook, where he started, Redbook, The Saturday Evening Post, Colliers, The Ladies Home Journal, Cosmopolitan, The American Legion, and McCalls. 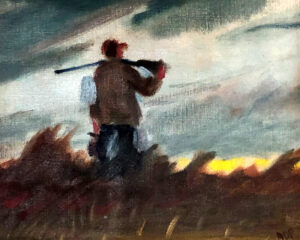