Gowans has had his toes in the water since his family moved from snowy New York to sunny South Florida, when he was eight years old. Whether crabbing, sailing or fishing, he only came in when the mosquitoes were biting more than the fish, which happened quite often. (But he got even with those bugs in high school and college while he worked for the state mosquito control).
Gowans states his interest in art began in the third grade and has grown even stronger as the years have become decades of creating award winning and collectable pieces of fine art. Art became more of a purpose while in college, but was interrupted while Gowans served as a pilot in the Air Force during the Viet Nam Era. Following his time in the air force, Gowans studied at The Art Center College of Design in Los Angles where his art became a personal challenge to become better than his classmates and to surpass the instructors expectation. He succeeded in both areas.

The working world found him employed as an art director and illustrator for several advertising agencies including Young and Rubicam. Some of his most interesting assignments included, Major League Baseball, the National Basketball Association, and several start up restaurants including Olive Garden and Wendys. Gowans most exciting and prestigious opportunities included The Grand Hotel, Hendrick Automotive Group, even an official portrait for a member of the British Royal Society as well as Illustration assignments for several yachting publications and even The Wall Street Journal.

Before Gowans became dedicated to his Representation Fine Art, several opportunities for poster art allowed him to do surrealistic art for varied clients such as The Antique Auto Rallye from NYC to Newport and the St. Petersburg Grand Prix. Over the span of years Gowans has had the opportunity to participate in very successful fund raising events with his original art for the Medical University of South Carolina’s Children’s Hospital and especially that hospitals Burn Unit for Children. While living and exhibiting in Charleston South Carolina, pieces of his art were purchased by The Virginia Investment Trust for their brand new hotel on Kiawah Island, a private resort and golf community near Charleston South Carolina. Gowans’ art is hanging in the lobby and other primary entrance areas for their Sanctuary Hotel.

Gowans has traveled (extensively) through 36 countries including New Zealand, the Caribbean, and even spent three months traveling through Europe on an old BMW motorcycle.

With over 60 years of sailing, Gowans has owned many different vessels ranging from 11 to 40 feet. He is also a three time National Champion in The Moth Class sailboats.

Gowans has been juried into the Mystic International Maritime Exhibition many times over the past 15 years, and his work has won that show’s Yachting Award twice. The International Artist Magazine has featured Gowans’ work several times.

Gowans has been concentrating on marine subjects for a long time. His ability to create light and wonder in the water and sky of each painting is almost breathtaking. His latest Sport Fishing pieces speak to you on a very personal level. 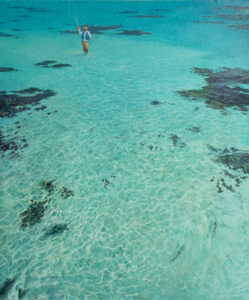 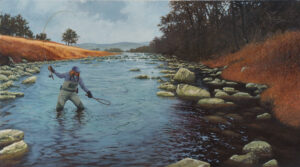 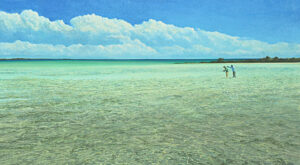 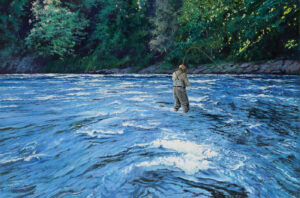 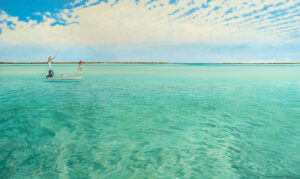