Born in Houston in 1944, Robinson always knew he would be an artist. He studied both commercial and fine art as a freelance designer and illustrator, polishing his painting skills on the side. It was at this stage in his career that his dad, J.C. absconded with one of his paintings and marched into a local gallery to show what his son could do. From that day on, he dedicated his life to fine art. Robinson was influenced by such artists as Frank Tenney Johnson, James Reynolds, Howard Terpning, John Singer Sargent and Joaquin Sorolla. He sought to evoke these qualities in his own work and establish his own niche in western art by unique combinations of light, color and action to leave a lasting impact on the viewer. Robinson won numerous awards including "Artist's Choice" in 2010 and "Best Group" in 2007 from the Briscoe Museum's Night of Artist's show in San Antonio, Texas. He was also honored with the "Olaf Wieghorst Award" for the best painting at the 2007 Mountain Oyster Show in Tucson, Arizona. 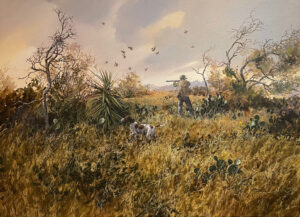