Robin Armstrong, widely regarded as one of the UK's most respected wildlife artists, has been painting for most of his life. His interest in nature and the environment began very early and he spent much of his childhood either watching birds or fishing, and very often both! A professional life as an artist began when he joined a commercial London art studio as a trainee illustrator and quickly rose to being a young studio manager. His passion for the environment and nature, and his determination to escape city life and pollution, led him to correspond and eventually meet and befriend the legendary Ewan Clarkson, a pioneering environmental writer of his time.

In 1969 Robin moved to the west country and lodged with Ewan and his family, then moved on to the wilderness of high Dartmoor and threw himself into making a living as a full-time artist. His early exhibitions were successful, TV and radio programs were made about him and he had high quality art books published.

Life was still precarious for artists, so combining his love of angling, he applied for and was offered the job of river warden on the River Tavy near Tavistock in 1979. This proved to be the perfect fusion of occupation and his passion for painting for a decade. Reinvigorated, with his return to full-time painting in the eighties, Robin boldly changed his approach to his canvasses. Previously his widely collected pictures were in the traditional vein - what Tom Fort described in his book 'Angling in Art' as "romantic and vaguely impressionistic."

With maturity Robin's painting had evolved into more stylized and contemporary forms, although it was still his years as a river warden, and making close observation of the water surface and surroundings, that gave him a unique insight into his subject matter and became a recurring theme. Five books came out of these years of study, including the best-selling 'Painted Stream'. Travels to far-flung dramatic places like the Arctic, Australia, Namibia, Egypt and Canada - as well as the island fringes of Scotland and Ireland - provided him with never ending inspiration. Still living on his beloved Dartmoor, Robin remains on a quest to understand and capture the changing world around him. 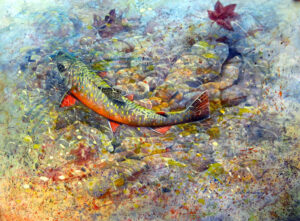 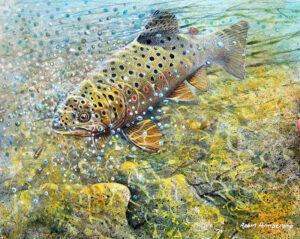