Dennis Lyall is an artist and illustrator with more than 40 years of experience in working with many of the biggest advertisers and publishers in the U.S.

A native of Iowa, Dennis doesn't remember a day during his childhood when he didn't have a pencil in his hand. He graduated from the University of Kansas in 1968, and while he was still a student (a junior), he was awarded a Gold Medal for his artwork by the Society of Illustrators in New York.

After graduating from college, Dennis began his professional career as a commercial illustrator in Houston, Texas, working for a commercial art studio, then opening his own studio and working as a freelance illustrator. In the late 1970s, after finding an agent in New York City - the 'mecca' for commercial illustrators at the time - Dennis moved his family to Norwalk, Connecticut, about 50 miles outside the City.

Dennis is familiar with all forms of artistic expression, but most of his finished work is oil on canvas. He has worked in all genres, including commercial illustration, portraiture, and marine- and Western-style painting. His assignments over the years have included portraits of the 39 signers of the U.S. Constitution and more than 40 postage stamps for the U.S. Postal Service. He also has work in many private collections across the country, plus with the U.S. Air Force, the U.S. Coast Guard, the Texas Historical Commission, and Northeastern Utilities. 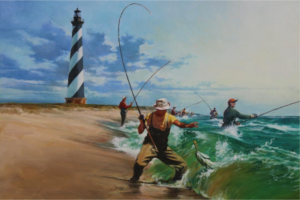