Henry McDaniel was born in Annapolis Royal, Nova Scotia in 1906 and died in Quincy MA in 2008 He emigrated at age 19 from Nova Scotia to Boston where he studied at the Vesper George School of Art (1925-1927) with Vesper George, Prescott Jones, William Hazelton and Frank Waldo Murray.

He developed his skills with watercolor in his leisure time beginning in the 1930s and painted en plein air for 20 years before he began his studio art in the 1950s. His first one-man exhibit (1940) consisted of Nova Scotian scenes at The Boston City Club Gallery. McDaniel stopped painting at age 100 after completing over 500 works, most of which are in private collections; some are in museums and corporate offices. His fine art work and articles by or about him have appeared in 27 publications from 1936-2010.

McDaniel's first print, "Fishing the Dry on the Upper Connecticut", was a limited edition made at Royal Smeets Offset Printers in Weert, Netherlands in 1973 for the members of The Anglers Club of New York. His painting hangs at the club with the art of Winslow Homer and Ogden Pleissner. His print "Morning on Taylor Shore" was presented to Charles, Prince of Wales in 1978 at the International Atlantic Salmon Foundation Symposium, London, England. It was produced by the International Atlantic Salmon Foundation and the Crossroads of Sports, Inc. in 1976. A later print, "Miramichi Morning", was produced in 1989 by the Atlantic Salmon Federation for its members. For this painting, McDaniel was named artist of the year by the ASF.

Henry McDaniel's art and illustrations were used in two books: "The Art of the Atlantic Salmon Fly" by Joseph D Bates, Jr. (1987), published by David R Godine, Boston, MA. and "The Compleat Lee Wulff" by Lee Wulff (1989), published by Truman. 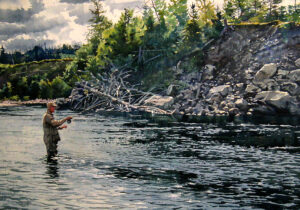