A well-known New York illustrator, John Scott was born in Camden, New Jersey and became an illustrator whose specialty was men's sport genre including hunting and fishing. These subjects were especially enjoyable to him because of the field trips into the wilderness to do his research. Two of his clients were Winchester Arms Company and Garcia Corporation.

He began studying illustration when he was 16 and first worked for pulp western magazines published by Dell and Street and Smith. Then during World War II, he worked for Yank magazine, an armed forces publication.

After the war, the magazines for which he illustrated were "slick" ones such as This Week and Woman's Day in the United States and Chatelaine and Toronto Star in Canada. By the 1960s, he was focused on wildlife subjects, working for True, Argosy, The Elks, and Sports Afield. During the 1970s, he turned exclusively to western art and was a founding member of the Northwest Rendezvous Group.

He has completed 12 X 32 foot murals for Mormon churches including the Temples in Washington DC, Salt Lake City, and Independence, Missouri, and did a series of large paintings depicting the story of Texas oil. 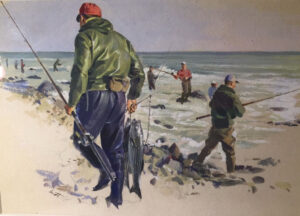