Francis Lee Jaques (pronounced jay-kweez) moved to a farm near the Mississippi River in rural Aitkin, Minnesota in 1904 when he was 15 years old. In Aitkin, Jaques began his career as a self-taught artist depicting wildlife and outdoor scenes in addition to being a taxidermist, railroad fireman, farmer and logger. After completing an electrical engineering course, he entered World War I, serving in France. He later worked for the James Ford Bell Museum of Natural History at the University of Minnesota in Minneapolis and the American Museum of Natural History in New York. Jaques painted dozens of dioramas (two duoramas he painted are in the Jaques Gallery at JAC - on permanent loan from the Bell Museum), in addition to backdrops for habitat groups. He illustrated over forty books with black and white scratch board drawings. Many of the books were written by his wife Florence Page Jaques, such as the well read, ‘Canoe Country’ and ‘Snow Shoe Country’. He also illustrated books by Sigurd Olson , noted Minnesota naturalist, including ‘The Singing Wilderness’ and ‘Listening Point’. In 1940 he was the winner of the Federal Duck Stamp award. Lee, as he was known by his friends, was a renowned easel painter of wildlife art and he and his wife, Florence, traveled the world in the course of his work. 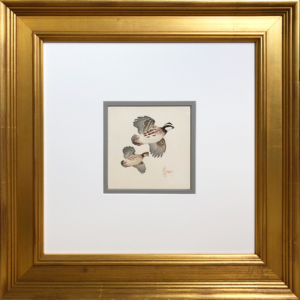