Milton C. Weiler (1910 – 1974) portrayed his passion for wildlife through his masterful paintings, carvings and drawings. His art has authenticity because he lived the life he painted as an avid gunner and angler. Weiler was considered one of the most accomplished painters of hunting and fishing scenes in this country during his career and was an expert carver of decoys.

Weiler lived most of his career in New Jersey, where fishing and hunting, especially waterfowl hunting, was prevalent during his time and among the community of outdoorsmen. He had access to some of the greatest fishing and hunting settings that became the backdrop of many of his Sporting works. 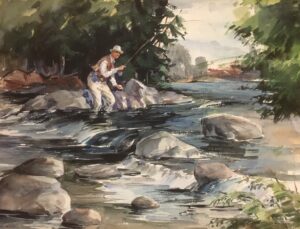