Born 1973 in Warwickshire, England. Haycraft grew up near the banks of the Avon and the smaller Stour rivers that flow through the county. Much of his youth was spent fishing for a wide variety of fish found in these waters. Chub, Barbel, Pike, Perch, Roach, Rudd, and Tench to name a few. A wide array of methods were deployed to catch these fish, some dating back hundreds of years in this area.

Upon leaving High School at 16, which was allowed back then, Haycraft attended Stratford-upon-Avon College to study Business, Law and Art. Drawing had been a constant during his childhood and teen years and it wasn’t long before he came to the conclusion that art was the only thing he was really any good at, or held interest in. Haycraft also likes fishing, which helped set him on an artistic educational path. He enjoyed the freedom of that learning environment so after completing A level Art he went on to Leamington Spa College of Art and Technology. Here he was able to get his feet wet with a plethora of fine art, photography, graphics and printmaking, all of which influence his work to this day.

With a strong interest in Natural History and yearning for the adventure of younger days Haycraft opted to study wildlife illustration at a remote Camarthenshire College campus located on a stately home overlooking the beautiful Twyi valley in West Wales. A haven for endangered species of the British Isles and home to wild Salmon, trout and the mysterious, famed Sewen (sea run brown trout). Here he was able to hone his painting skills and roam the countryside freely. He stayed on in the area for a number of years experimenting with different media and mixing them. The subject matter increasingly leaning towards waterscapes and the wildlife found there.

In 1999 Haycraft moved to Colorado, having previously visited the Northwest. It was here he caught his first fish on a fly rod and there was no looking back. An ant pattern that I didn’t expect to work, thrown into a brisk riffle on the upper Arkansas delivered him a stunning wild rainbow trout with brilliant colors

In 2005, with wife and two kids Haycraft moved to Bend Oregon. It was around this time he began experimenting with wood, as a means of depicting his favorite subjects. Using the grain of the wood as both canvas and medium, imparting its individual qualities into each piece - And to great effect after certain challenges have been overcome. Various techniques and crafts are employed to produce his work in 2 and 3 dimensions.

Oregon has an extraordinary, diverse range of habitats and bodies of water that provide Haycraft with plenty of inspiration and fishing opportunities. Unfortunately, along with much of the country, all of these bodies of water are under threat in some way or another and must be protected. As with many artists who create what they love and respect, Haycraft hopes his work shows just how beautiful and important these environments are. 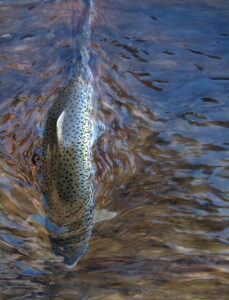