Born in 1916 in Adams, Massachusetts, Francis “Frank” Golden rose to become one of sporting and wildlife illustrators’ most acclaimed artists. Painting by the age of eight, Golden began with Benjamin Moore paints and hardware-store brushes, as the tiny mill-town he grew up in could not support an art store. What captured his young attention was the Berkshire Mountains’ colorful fall foliage and so he began to capture those moments in his works.

After achieving a degree from Museum of Fine Arts Boston School of art in 1939, Golden traveled extensively, settling in Chicago, New York, Connecticut, and eventually making his way back to Massachusetts where he lived for the majority of his life. Golden was self-decidedly a plein aire artist, but known as an illustrator of which he was none too thrilled, as he did not see his work as illustrative. His watercolors however were popular amongst the sports magazines and by 1974 he was a highly respected wildlife and sporting scenes painter. Golden was an avid outdoorsman and traveled worldwide to experience the lifestyles of different sporting arenas. Considered a “macho Renaissance man” by anyone who knows him, Golden indulges in such diverse activities as auto racing, yachting, flying, singing tenor in a barbershop quartet, and baking gourmet apple pies from scratch. In 1939, Golden moved to New York City and freelanced as an artist. He received such commissions as posters for JC Penny and illustrations for Collier’s.

By 1948 Golden had received so much acclaim for his talents with illustration, he went on to paint pictures for The Saturday Evening Post, Sports Illustrated, Gray’s Sporting, Sports Afield, and Audubon among other prestigious magazines for the next thirty years. Not only were his colorful illustrations attractive, but his ability to demonstrate action and the illusion of movement was the attraction of his works. Golden’s works demonstrate strength, control, imagination, impressions of movement, and reveals his precision of care and speed. Based on a lifetime struggle of discovering how best to explore his artistic realm, Golden left the illustration market in 1978 to paint at his own discretion. He collected awards and citations from the Society of Illustrators and the Art Directors Club, and his watercolors hang in galleries and private collections across the continent. 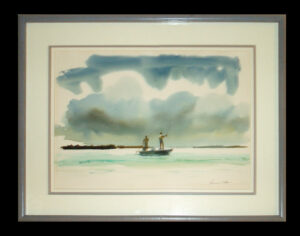 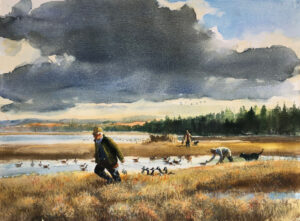 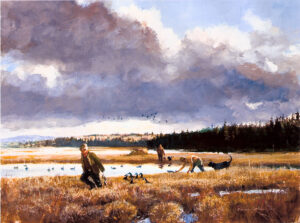