Keith Cardnell has always had a natural ability to create images. His father was a draughtsman with a large family and, as such, could not find the courage to pursue his talent or a career in the arts as it might risk the welfare of his children. However, he always had a number of large encyclopaedias on European art in his workroom that Keith was allowed to browse. He was encouraged to draw but only as a pastime and was given copious quantities of paper to keep him quiet. He can barely remember a time when he wasn’t actively drawing on a daily basis and vividly recalls being introduced to the ‘wonder’ of oil paints at the age of thirteen.

Keith always questioned the value of ‘modern art’ and mistakenly enrolled at a Technical College and School of Art that he discovered, to his dismay, had a strong leaning towards ‘conceptual art’. The problem was compounded by the attitude of his parents. In the early post-war years of their marriage Keith was led to believe his parents took lodgings in, or close to, an artist colony populating, what was then, a very bohemian area of Cheyne Walk, Chelsea. They appeared to have developed a very jaundiced opinion of the life-style of these people and when he explored the prospect of decamping college and pursuing an artistic career path the resulting family argument took on seismic proportions. That said, Keith was reluctantly allowed to attend tutored courses in ‘life studies’ over several seasons with a truly gifted instructor who, with fearless endeavour, managed to instil in him the best practices of figure and portrait painting.

In all truth though, when all is said and done, he was not prepared to suffer too much for his art. The UK art market was a very different animal in the 60s and 70s with little opportunity for those who sought to inject any level of realism into their paintings. Thus, after a short while spent seeking his fortune abroad, as a matter of survival, he returned to begin his ‘wilderness years’ working in various financial institutions in the City of London. By shear chance (and by the grace of Bill Gates), he stumbled upon a surprisingly lucrative career supporting PCs in a merchant bank. After ten years of uninterrupted career progression, falling victim to a particular spate of ‘mergers and acquisitions’, he was awarded a settlement large enough to finance the kick-start for his art career and bolster the courage he needed to ‘stay the distance’. Luckily it was also sufficient enough to ensure he would not compromise his own personal artistic objectives or risk financial meltdown before establishing his own market.

Initially most of Keith’s work was sold through small local galleries until he established a wider reputation through articles in magazines and his success in securing prize money for his work. He now owns a 40-foot motor cruiser that he uses to navigate the rivers and coastal areas in search of suitable subject matter for his seascapes and sporting paintings. Fifteen years after starting to paint professionally most of his sales are generated by commission work for his committed customers together with people who come across his articles in back issues of magazines and how-to-do books to which he has contributed. This income is still supplemented by prize money from magazines and commercially funded competitions as his style and subject matter increasingly yields success. Also, selling signed, high quality, canvas giclée prints has proved a rewarding pursuit when accommodating those with less disposable funds available to hand but have the same passion for beautiful images that may have less of a rarity value. 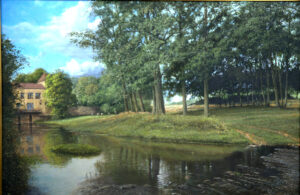 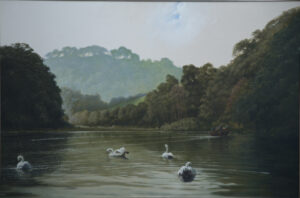 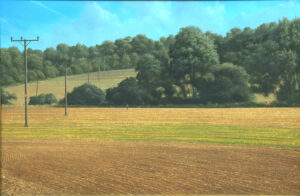 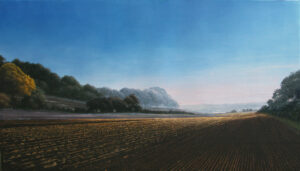 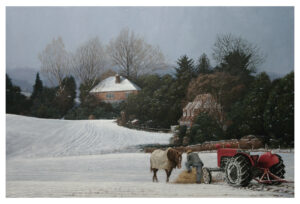 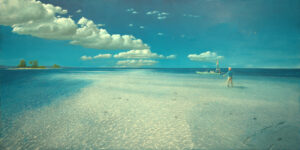 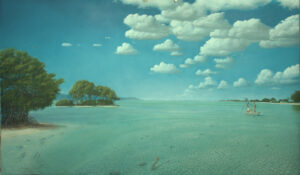 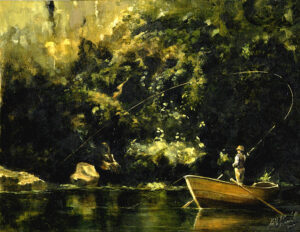 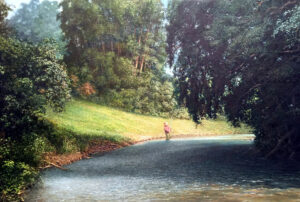 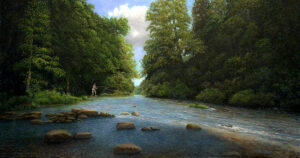 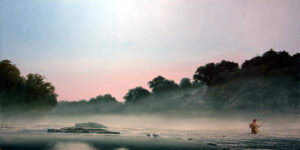 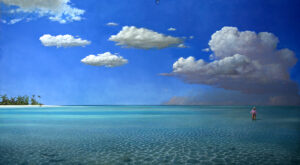 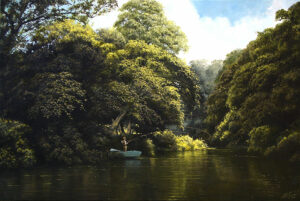